Skip to content
HomeAnalysisToys “R” Us vs. Smyths – A Modern Day Tale Of David And Goliath

I recently took my son to a soft play area near where I live. My son, who is just over one years old, took an instant liking to one of the toys. It was a “Little Tikes Blue Rocking Horse”. He liked it so much I decided to buy him one to play with at home.

I pulled out my phone and did a quick product search on Amazon. The price came up at around £25 and not on Amazon Prime. There was also a £3.99 delivery charge. I didn’t want to wait so I decided to check the major retail stores.

Following a quick search on Google I found that (much to my surprise) Amazon were more expensive than the major retailers; Toys “R” Us were selling the horse at only £17.99. There was a Toys “R” Us not too far from where we were, so I decided to pick one up and save some money in the process.

As we left the play area, I thought I’d do a quick stock check on the Toys “R” Us site to ensure my trip would not be in vain. I clicked the Google product ad and went straight to the product page.

Before I go any further I want to clarify that I love Toys “R” Us. Ever since I was a child, it’s been one of my favourite stores and it feels very nostalgic to be able to visit there again but now with my son.

My feeling of nostalgia soon turned to frustration as I began to realise that Toys “R” Us were not keeping up with modern day e-commerce best practises. The product page was fine, but a plethora of clicks later, I was still unable to check the stock level. I assumed I could “add to basket” and select “collect in store”, but no such option existed. The note on the product page told me that “I may be able to find the product in store” so I went through to the store finder page. There was a pre-populated postcode which I assumed was my current location… as it turns out, it was not. Apparently, there were 45 stores near me.

I muddled my way around and found the number of the store I wanted… no one answered! Feeling quite frustrated I thought I would just drive down and check as it was a large store so the chances were good that they would have it in stock.

The disappointment points were stacking up when I was told there were none in stock although they could transfer the stock from one of their other branches. A very outdated method, but they were willing to help so I couldn’t be too mad. 10 minutes later the customer service representative informed me that she could not get through, but if I left my name and number she’d try again later and call me back. So I did… I heard nothing.

The next day I rang the store to explain the situation and how I had not heard anything. Turns out they had transferred the stock and informed me that I would be able to collect in their store within a couple of days, although I had no collection number or time to confirm the collection.

That evening, I decided to check Smyths Toy Store. I’d seen them advertising a lot recently and their ad stuck in my mind. The location was near to the Toys “R” Us that I’d been dealing with, so I checked their site and price. Although the price of the horse was £5 dearer, I couldn’t help but love their online experience. Within minutes, I knew the price and availability and was able to successfully reserve one. They even gave me the address and the opening times for the store that I had placed the reservation with!

Although I’ve seen this countless times before, I just couldn’t believe that a giant like Toys “R” Us would risk their future by not rebuilding their foundation with a digital-first approach. Especially considering the likes of Amazon and eBay who are pretty much after every single market available.

Curiosity got the better of me and I thought I’d check Google trends to see how the two brands were stacking up against each other. I wasn’t surprised to see Smyth’s growing success or how much ground they had covered to catch up with Toys “R” Us in the UK. As a brand they look set to overtake the toy giant this Christmas.

Earlier I mentioned how I had seen Smyth’s advertising a lot recently and how their ad stuck in my mind and it occurred to me that they had nailed their ad! As a toy store, their ad strikes the perfect balance between marketing and storytelling. The song for the ad, “if I were a toy” (a remix of Beyonce’s “If I were a boy”) is catchy and tells the story of a boy describing all the things he would do if he were a toy. What is truly magical about this ad is that it breaks all gender stereotypes. One second he’s flying through space, then he’s the queen of the land before hopping into the Millennium Falcon and flying through a city made from Lego. It captures the magic of being a child perfectly and does it in an almost Disney like way.

The Toys “R” Us ad, on the other hand, feels outdated and uninspiring with the same old theme song.

Pulling up both youtube pages right away shows the success of the Smyths brand. Their 2016 ad has over 6million views. Which is very impressive considering the infamous John Lewis ad has 18 million views but is highly promoted. Their page has over 117 thousand subscribers versus Toys “R” Us’ 18.6 thousand. 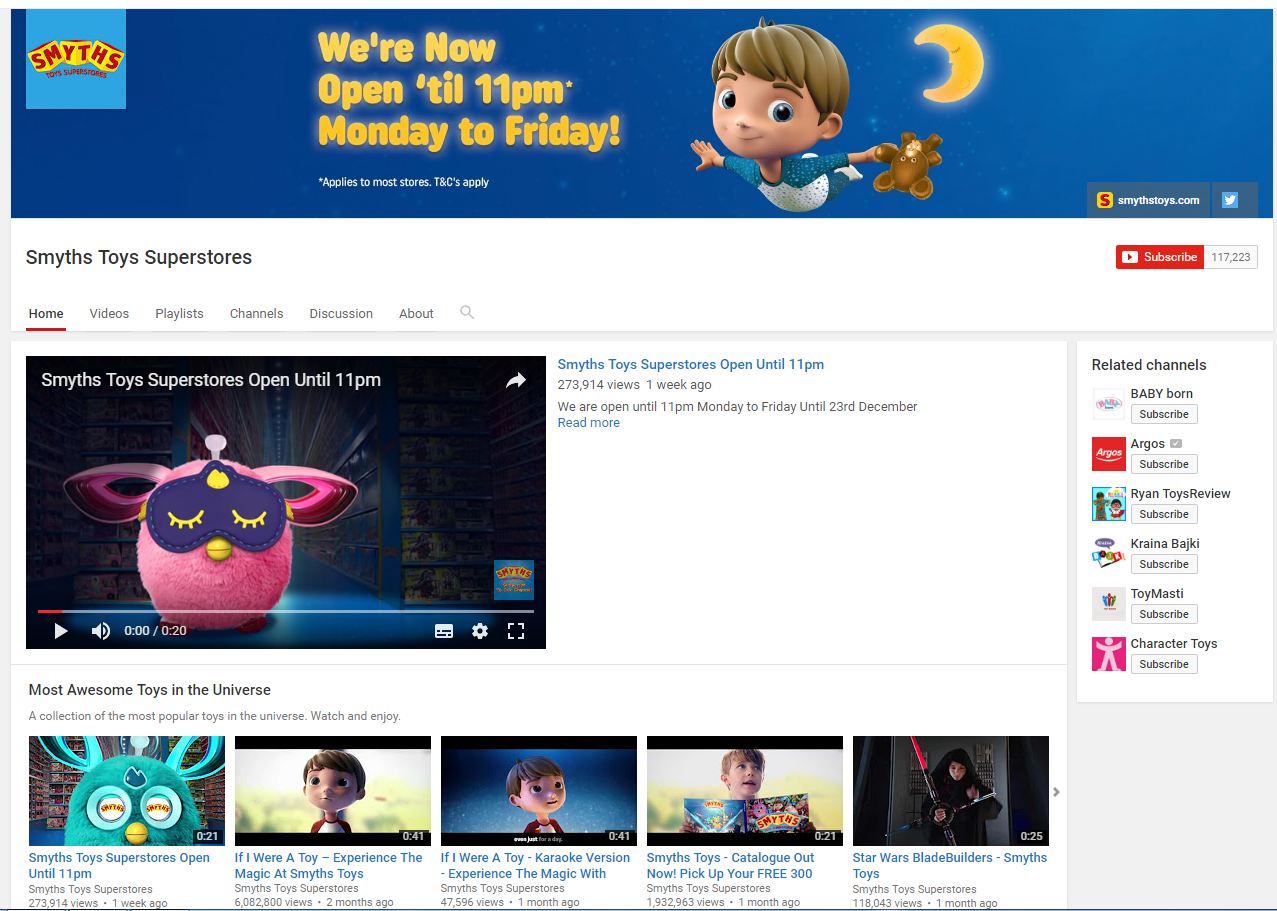 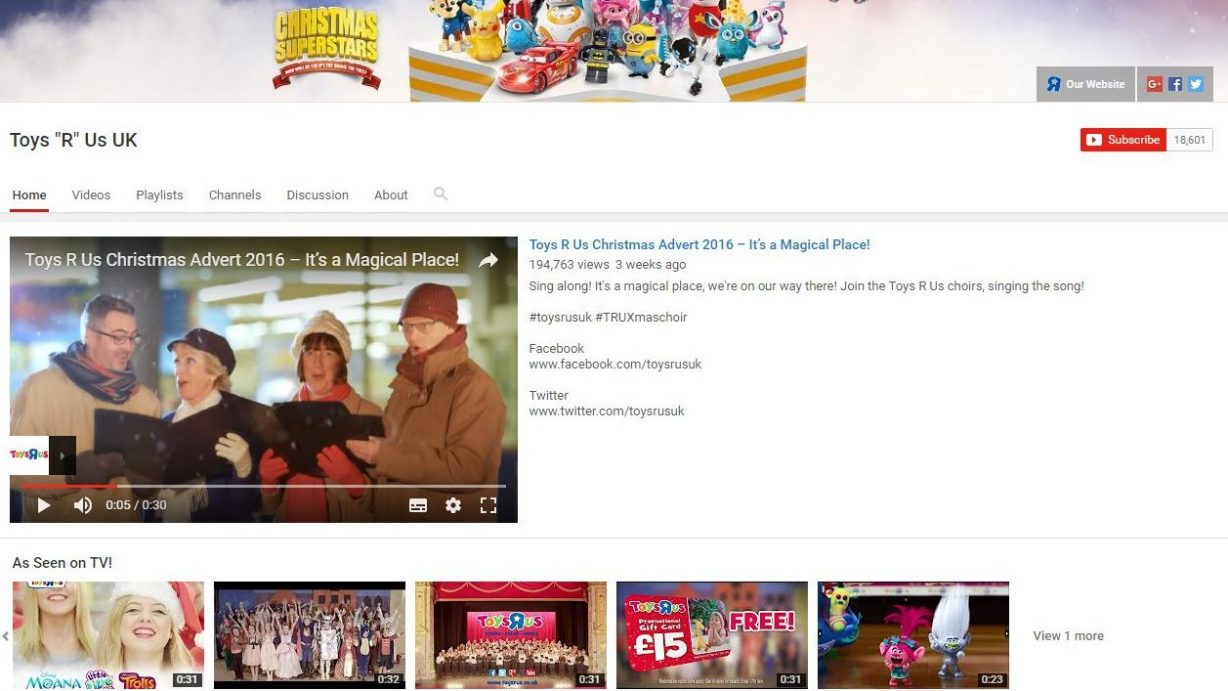 Going back to what I know best, I thought I’d do a visual guide of the two user journeys.

No indication of whether the stock was available in store.

Apparently, there are 52 stores near me.

No indication of store opening times.

Within one step I’m aware that the stock is available.

The experience at Toys “R” Us wasn’t completely terrible. Had I picked a toy that was available for click and collect, I may not have even felt the need to write this article. However, I did and naturally went through the user experience. It wasn’t a planned experience so that I could write an article at the end of it. All of the above happened and I decided that rather than let it slide, I should write an article and hope that someone at Toys “R” Us picks it up.

The trends graph doesn’t show a sudden jump in Smyths success, it shows gradual growth. Just like my experience won’t lead to a sudden drop for Toys “R” Us but it does suggest a steady decline (as supported by their brand graph). The marketing will play a part in their success but equally, so will the user experience.

What does all of this mean? It means that even if only 10% of product stock can’t be checked online, then that’s potentially up to 10% lost customers. Similarly, if even 20% of customers are more inspired by Smyths ad then that’s potentially a further 20% moving to Smyths. Maybe these numbers are a bit inflated, but if you start adding up the percentages, you start hitting numbers that will eventually be felt at a financial level.

Luckily, in this instance it wasn’t peak season so I had the time to make calls, wait in store and collect a few days later, but had this been mid-December I definitely wouldn’t have waited.