I often get asked why I started CRAP Talks and I usually fumble out an answer about not finding any conversion optimisation and analytics related events on meetup.com. Although that is partially true, it is in fact much deeper than that. Truth is, not finding a CRO related event was just the catalyst I needed to start being the change I wanted to see everywhere else.

At the time of starting the meetup, I had no idea whether I would even have the motivation or time to still be at it over sixteen months later let alone that I would be writing about my philosophies on conferences, events and meetups (I will use “event” from here on to refer to all three). What I did know however was that something wasn’t right at most of the events I was going to (both as a speaker and as an attendee), and my time and the time of everyone else there was not being valued. I naively blamed the speakers for not being better, having good content and keeping me interested, but again it was much deeper than that. The success or failure of an event for me and other attendees came down to the person or people who organised it. If CRAP isn’t successful it won’t be anyone’s fault except mine.

An event is like a football team. It can start a season with a lot of potential but fizzle out or it can start off with none and climb to great heights. It can have years of unsuccessful, mid-table performances or tremendous long-term success. But to reach Barcelona status, play in the big leagues and consistently deliver quality performances season after season, requires constant monitoring, training, learning, practising and adapting.

With each passing event (CRAP or otherwise), I’ve started having clarity of thought and a better understanding of what makes a good event (although that may be subjective). Whilst I don’t believe that CRAP is close to perfection, I know there is a sense of purpose in the pursuit of it.

There are many things that I have learned and continue to learn along the way and rather than write about everything in one post, today, I want to talk about the responsibility of the organisers. Using the footballing analogy again, the organisers are the managers, they determine what team to field, how to change and adapt to each situation and study the game as much as possible to achieve success. The speakers are the players, some will perform well others won’t. And the audience are the fans, they can choose which games to see, which teams to support and the price they are willing to pay.

Over the years, I have observed that most organisers tend to primarily focus on sponsors and sponsorship, then on speakers and finally the audience, although in many cases this last part has been completely ignored. And whilst there is nothing wrong with sponsorship, a focus on it means audiences take away nothing at all or worse still, all the wrong “things”.

I recently heard an organiser of a very large event jokingly thank the sponsors for “paying his mortgage” (cringe) but one look around the venue and it was clear that there was truth in that statement. As a sponsor, I completely understood the attraction for being there, it was a highly targeted pool of leads who could become prospective clients.

As a speaker, the attraction was less clear. Maybe it was the glitz and glamour of it all, the ability to almost feel like a star at a sold-out gig, find some leads for your agency or maybe just a genuine opportunity to share your message with a large audience. But as an attendee, I felt like the organisers completely sold me to the highest bidder and I was supposed to be ok with that because of a few gimmicky bits of branded merchandise that I would get in return.

At this moment in time, I will look inwards and try to respectfully capture the mindset of attendees. It’s not completely fair to blame organisers and sponsors for not valuing your time. As an attendee, you also need to decide the value of your time. In the early stages of your career, on a low salary, the “freebies” and a day out of the office are the entry drugs into the world of corporate events. The need for thought-provoking talks and networking opportunities lie at the bottom of your list of priorities behind free food and drink. But even then, there are only so many notebooks and pens one needs. As you progress, yes, those little things still offer instant gratification, but the pleasure is shorter lived. It is at this moment you need to ask yourself, “had I not walked away with these things, was my time worth what I had just heard or seen?”

As an analyst, I am often looking for the signal in the noise from the data I work with. And it has only been in the last 16 months that I have started applying this same method to the events I’ve been too. By removing all the noise, (the food, the drink, the freebies, the location, the keynote speaker, my motivation) and focussing on what I took away from the event, I can determine whether my time was worth it.

As an organiser, it comes down to purpose. What is the purpose of the event? What am I hoping to achieve? Are my attendees taking away the right things or the wrong things? Are their bags filled or their heads? Are the speakers on board with my vision and will their talks be a good fit for the audience? By starting to understand these things, you increase your chances of “winning”.

As a speaker, what are you hoping your audience will take away? Are they the right audience for your talk? Did you agree to talk without first learning about the purpose of the event? What is the organiser going for? Is your talk in line with their values? Why are you even giving the talk?

Pulling It All Together

As the organiser, understanding these symbiotic relationships is how you will find (I believe) true excellence. An early stage meetup can operate just fine without sponsored intervention but for successful growth, there must be a balance starting with an understanding of the audience, the compatibility of the speakers and finally the value of the sponsors… not the other way around.

The message of this post, whilst long, is a simple one; Focussing on your audience and not on the noise, will ensure that your attendees take away the right things. 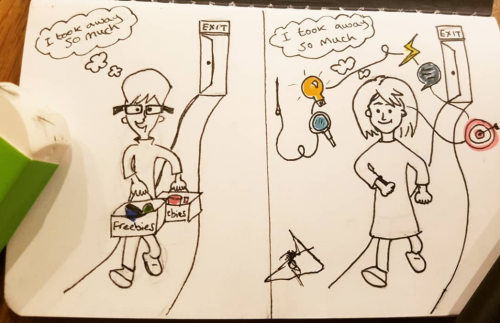