Conversion rate optimisation 2020! It’s time to step up our thinking or should I say it’s time to break it down… into first principles. I recently agreed to do a talk at an event where I had the option of presenting my conversion optimisation talk from 2019 or creating a new one. I have a rule where I retire a talk after I’ve given it a few times. This is to ensure I keep thinking and coming up with ideas I can share about problems that I face daily. So, despite having no idea what I was going to talk about I agreed to do it!

A few weeks before the event, the makings of an idea started forming in my head. I just had to force my brain to construct that idea into a coherent narrative. Usually done by depriving it of sleep and water.

I began thinking about my approach to CRO and how I like to deconstruct a website into its smaller parts. This allows me to understand which levers to pull when analysing or optimising. In that moment I realised this is “first principles thinking” – a term popularised by Elon Musk about his approach to building SpaceX and Tesla.

Before we apply reasoning from first principles to conversion rate optimization, let’s look at the physics definition: 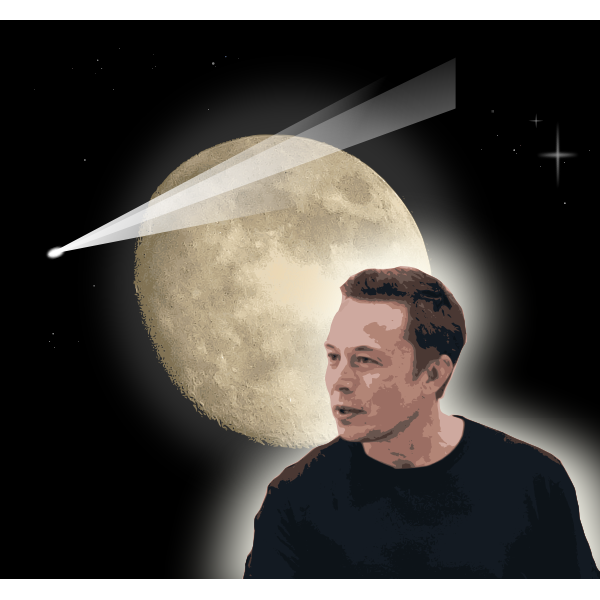 “First principles thinking means boiling things down to “the most fundamental truths” and then reasoning up from there.” – Elon

Elon Musk applied this thinking when building SpaceX. I won’t go into the details as you can watch the video but after some failed attempts to buy rockets he realised he could build the rockets himself for a significantly lower cost than buying one out right. After all, the fundamental components of a rocket are “Aerospace Grade Aluminum Alloys, Titanium, Copper and Carbon Fiber”  all of which can be purchased at a fraction of the cost thereby reducing the cost of space travel.

The same physics approach of thinking was also applied to reducing the cost of and mass-producing batteries for Tesla. “Cobalt, Nickel, Aluminum, Carbon, some Polymers for separation and a seal can” –  These are the fundamentals of a battery.

So How Would Elon Musk Approach CRO?

Jim Cantrell – “he [Elon Musk] starts by defining a goal and he puts a lot of effort into understanding what that goal is and why it is a good and valid goal.” Having a good goal is the basis of his success, the same goes for CROs, product managers, analysts, marketers, etc…

CRO’s think this means conversion rate. Conversion rate is not a goal, it is a lever! The goal for most companies is revenue (or profit). It’s worth noting that the goal is not the same as the company’s mission statement although I suppose the same level of thinking can be applied to one’s mission statement. I would much rather 1,000,000 visitors converting at 1% than 100,000 converting at 5%.

2) Break It Down Into First Principles

Most people grasp the concept of micro and macro conversions but there are many people who are unable to piece together the entire picture. I’m loosely referring to unit economics here. Unit economics are your business performance metrics. I say loosely as they usually refer to a financial understanding of your business. Thinking in first principles helps you break it down even further. I’ve put together a first principles unit economics tree to explain this. In reality, this tree can be used by CRO’s, product managers, marketers and analysts to have a worldlier view of their site.

How to read the above diagram. Starting from the top, work your way down, multiplying each child component. When you reach a box that can no longer be broken down, you’ve reached a fundamental law/lever that can be influenced with changes. e.g. spend more to increase traffic, reduce the mark up on products to influence average price (which has a dotted line impact to conversion rate) or optimise your cart/funnel.

Most of those are self-explanatory, so let’s just look at conversion rate which as previously mentioned is a lever, not a goal.

Depending on your business, the number of steps in your funnel will vary. I’ve used some made up (but hopefully not unrealistic) percentages to demonstrate.  This example website has 6 steps to purchase. The first is “1-bounce rate”. This is the number of users who stick around to continue onto the next step. The second step could be a shop page. The third category page. The fourth a product page and finally add to basket and complete the checkout. When you multiply them all together you get your conversion rate. Of course, this is a model so it’s simplified. In reality, you would have multiple funnels running simultaneously on your website. This is one of the main reasons why CRO is so complex.

What if your goal isn’t to increase revenue but to scale up your experimentation program. Well, the same level of thinking can be applied here. I’ve added some extra arrows to show how you can influence the fundamental parts to reach a goal of X hundred tests per year.

3) Build Up From There

Once you’ve broken down your goal into its fundamental components you can start to rebuild. Going back to our made-up metrics:

You could optimise the landing page to reduce the bounce rate or optimise each step in the funnel to increase the continuation rate or you could optimise the basket and cart to increase completion rate. You could even deconstruct each page to understand the levers that can be pulled within it. I work for a travel company with a call to book model. If I break that down into first principles, then the goal is bookings and the unit economics are as follows:

In order to rebuild this journey, I look at each step, the levers that I can pull and the child metrics I would be measuring: 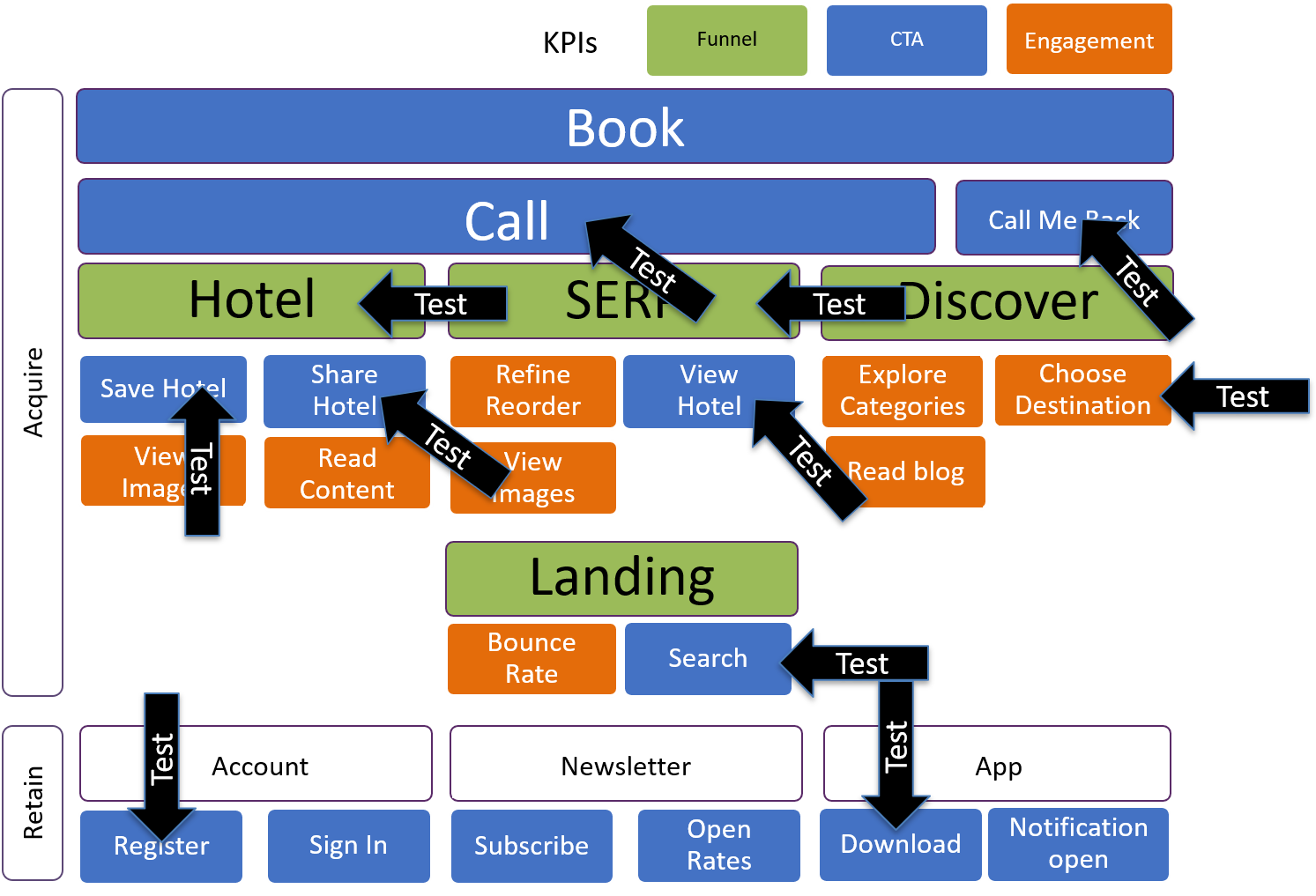 Conversion rate optimisation is not black and white. Increasing the continuation rate at each step of the funnel doesn’t guarantee an increased conversion. You can always artificially increase continuation rates in your funnel but that just means customers who would have dropped out sooner, drop out later.

What I’ve presented here is a simplified version of reality. In reality, journeys will contain multiple landing pages and paths that users can go down resulting in countless permutations of the user journey. Having a fundamental understanding of your site economics will ensure you have a fighting chance to improve and optimise. There are also external economic factors that impact your business, are hard to quantify and outside of your control.

I’m not sure if this is exactly how Elon Musk would approach conversion rate optimization but hopefully, I’m not too far off the mark. This also ties into a post I wrote about “Knowing your baseline conversions“.  I truly believe that becoming a better analyst, CRO or product manager begins with a deep understanding of your product.

I hope this article has inspired you to go away and break down your own sites using first principles thinking. I’d love to hear your thoughts and see your own unit economic trees.